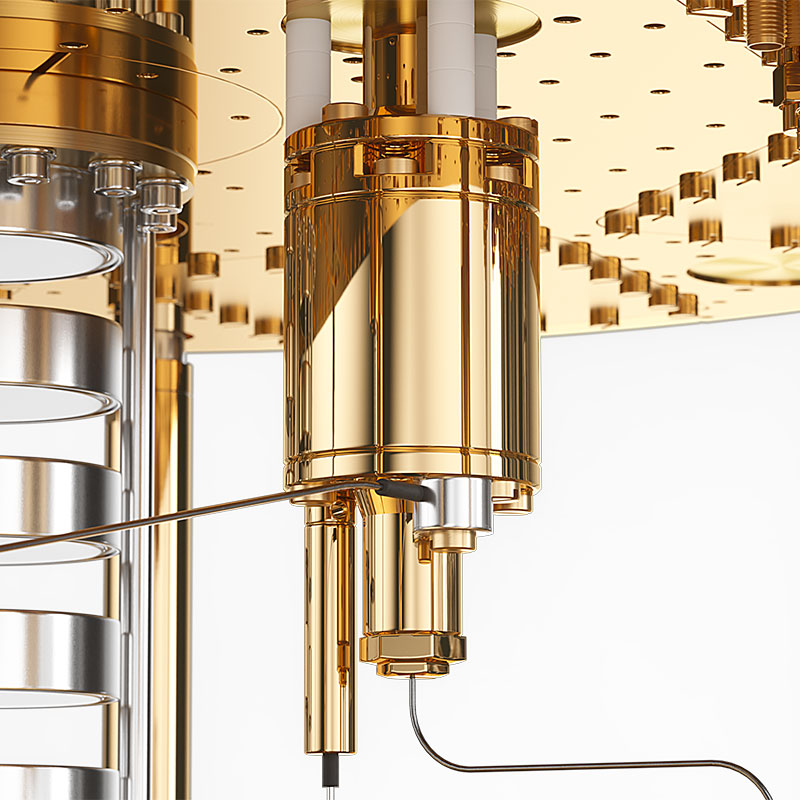 In many quantum technology labs, measuring the state of a qubit is achieved by sending weak microwave tones into a cryogenic refrigerator and strongly amplifying the output signal to boost measurement fidelity.

At such small signal levels—even down to the level of single microwave photons—it is crucial to understand and reduce the noise added by the microwave amplifiers and other components.

However, test and measurement equipment for such low-level microwave signals is still in its infancy despite its significance in quantum computing optimization. In principle, the noise performance of microwave amplifiers can be determined by measuring its noise temperature or noise figure. Yet applying the hot-cold source or Y-factor method in millikelvin environments to detect the noise in quantum computing readout lines proves difficult, not least because of a lack of readily available cold-loads. Even with custom-built devices, however, there are several technical challenges if the noise temperature is below one kelvin.

To overcome the challenges scientists in quantum computing research are facing, the Bluefors Quantum Team has developed a new diagnostic tool: the Cryogenic Variable-Temperature Noise Source, which is placed inside the cryogenic environment. The central element of the device is a matched resistor network that was implemented using a copper-cased attenuator. When installed on the cold plate of a Bluefors system, the noise source uses an innovative thermal weak link to cool efficiently, while still enabling temperatures in the range of 0.1 K < T < 5 K within a cryostat without causing significant back action heating on the sample space.

The Cryogenic Variable-Temperature Noise Source therefore allows the user to optimize quantum computer readout lines by improving the speed and accuracy of validation. Furthermore, it can be used to directly examine how qubits behave when disturbed by noise.

Proof-of-Concept Study Validates Readiness for Use

The newly developed Cryogenic Variable-Temperature Noise Source was tested, and the results were published in the Review of Scientific Instruments and chosen as editor’s pick. For demonstration purposes, the noise source was installed at the input of an amplifier cascade of a typical qubit readout line for circuit quantum electrodynamics. The cascade included a Josephson traveling wave parametric amplifier (TWPA) as the first amplifier in the cascade. The TWPA was provided by VTT and placed in series with a commercially available cryogenic HEMT amplifier.

Following the initial test series, the research team also measured a new kind of two-layer Josephson parametric amplifier based on overlap junctions, developed by NIST and Fermilab. The new method allowed noise performance to be observed at the quantum limit, as presented in an article published in Applied Physics Letters in March 2021.

With the development of the Cryogenic Variable-Temperature Noise Source, Bluefors continues to deliver on its promise to enable world leaders in quantum technology to meet measurement challenges through new innovations and expertise. The new diagnostic tool has been successfully tested and demonstrated to enable accurate control and measurement of the noise temperature of ultra-low noise amplifiers in a cryogenic environment, e.g., microwave or HEMT amplifiers installed in qubit readout lines. The noise source is easy to use and enables experts in quantum research to readily perform noise characterization based on the Y-factor method using a continuum of input noise temperature points between 0.1 K and 5 K.

The Cryogenic Variable-Temperature Noise Source is the first commercially available device specifically developed for characterizing the noise added by amplifiers or other devices in a cryogenic microwave measurement system. It fills a notable gap in technology required to quickly and accurately quantify the performance of cryogenic low-noise amplifiers and thereby aims to support advancements in quantum computing research, especially when aimed at detecting qubit states. The development of low temperature detectors for astrophysical observations is another potential area of application. The functionality of CVTNS is also widely applicable to optimizing a range of low temperature detectors that employ microwave readout. These detectors include the microwave kinetic inductance detector (MKID) among others.

The cryogenic noise source expands Bluefors’ portfolio of dilution refrigerator measurement systems that can be tailored to the specific needs of each customer by adding, for example, experimental wiring, fiber optics, and magnet integration.

If you require further information or have questions about the Cryogenic Variable-Temperature Noise Source, please contact our Sales Team.